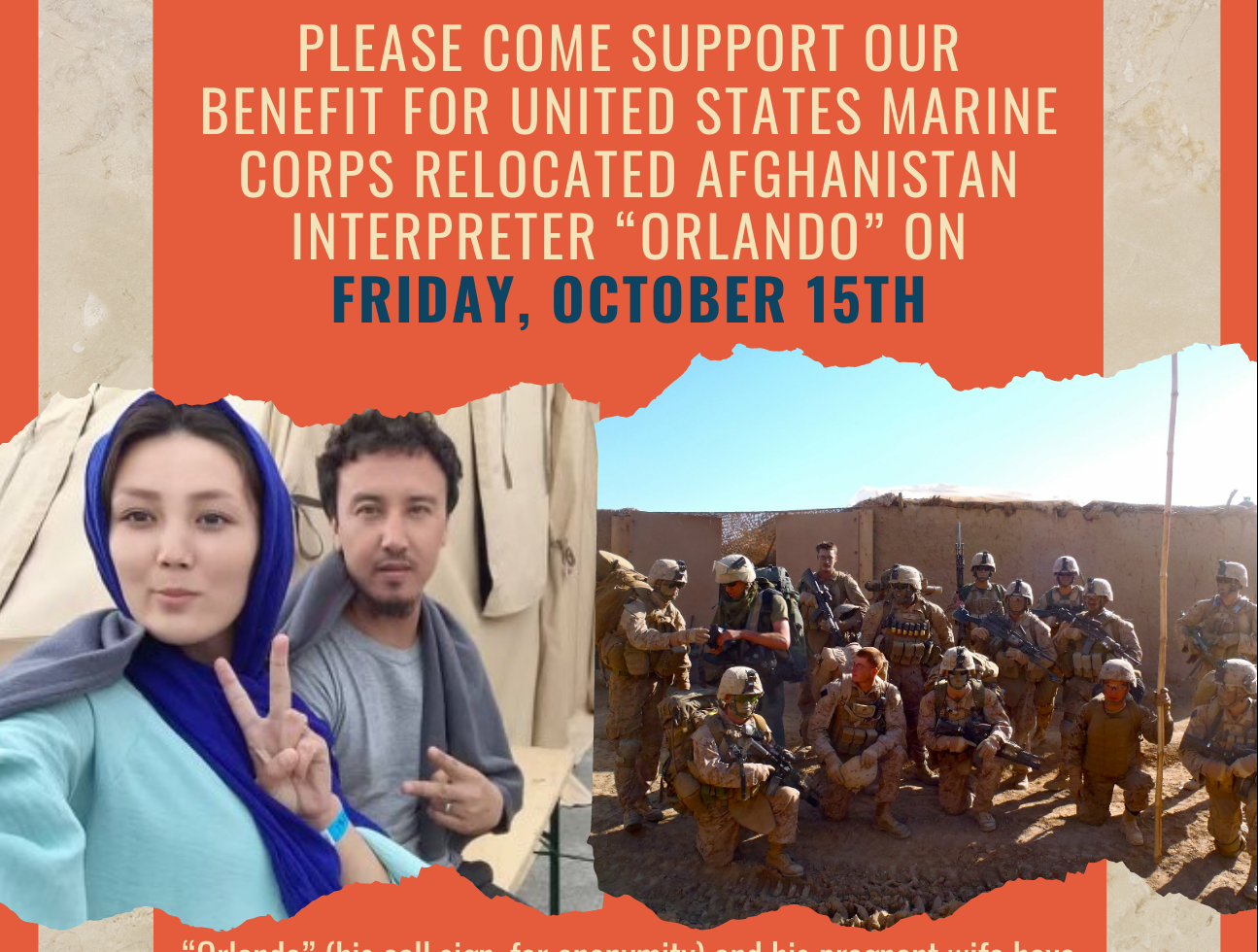 Please Come Out To Support A Great Cause on Friday, October 15th! We will be donating $1 for every beer purchased to contribute to the GoFundMe set up for relocated

Please Come Out To Support A Great Cause on Friday, October 15th! We will be donating $1 for every beer purchased to contribute to the GoFundMe set up for relocated Afghan interpreter, Orlando, and his pregnant wife. The following is from our Director of Brewery Operations, Parker Hobbs:

From 2008-2020 I served in the United States Marine Corps as a Combat engineer. From 2010-2011, Orlando (his call sign, for anonymity) served as my squad’s interpreter in the city of Marjah, Helmand Province, Afghanistan.

Orlando took an oath to defend the people of Afghanistan, and by doing so, worked tirelessly alongside Marines to establish peace and stability in our area of operation. Upon completion of his tour, Orlando began receiving death threats from the Taliban, forcing him to flee to Pakistan. When Orlando arrived in Pakistan, he was accused of being a double agent and was detained for five months, during which time he was repeatedly beaten. When Orlando was finally released, he fled back to Kabul where he continued to receive threats from the Taliban.

In 2014, My Marine Squad leader, Dustin Ivers helped Orlando start the application process for a Special Immigrants Visa, so that he and his wife could escape harm’s way. In the last several weeks, as the situation began to unravel, Dustin reached out to all that were in his Marine squad, and we began sending hundreds of letters to Congressmen, Senators, NGOs, and the State Department. Eventually, all of this hard work paid off, and Orlando and his six-month pregnant wife are now both safely inside US borders.

Unfortunately for Orlando and his wife, the struggle does not end there. Like many refugees before him, Orlando and his family will face challenging obstacles like finding steady employment, securing housing, fitting into a new country (let alone neighborhood), obtaining a driver’s license, raising a baby with no outside family support, navigating a town or city for the first time…the list goes on.

In knowing these challenges, Dustin Ivers created a go fund me with an overall goal of raising $50,000.

In an effort to provide a better understanding of how your money will help ease Orlando’s stress of settling into a new country, I have compiled a list of expenses Orlando will face when he leaves his refugee camp for the first time.

Most expenses are projected over the first six months in the U.S.

Keep in mind these projections are rough estimates based on California averages. Cost of living may vary depending on which state they settle in.  Orlando says he wants to go to San Diego, where Dustin lives.

We would appreciate your participation in our small but meaningful fundraiser. You can also learn more about Orlando and his story and contribute directly at the GoFundMe site set up for him, which can be found by searching for “Afghan interpreter Orlando” on the gofundme.com home page.